the :command:`rand` generates pseudorandom numbers uniformly distributed between 0 and 1, but not including either 0 or 1.

Say you are the gambling type, and bet your friend $5 the next random number will be greater than 0.49

The odds of you winning the last bet are slightly stacked in your favor. There is only a 49% chance your friend wins, but a 51% chance that you win. Lets play the game 100,000 times and see how many times you win, and your friend wins. First, lets generate 100,000 numbers and look at the distribution with a histogram. 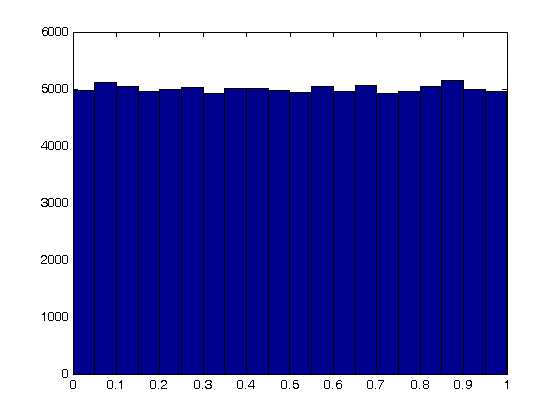 Now, lets count the number of times you won.

the rand command gives float numbers between 0 and 1. If you want a random integer, use the randi command.

The normal distribution is defined by

is the mean value, and

get a single number

get a lot of normally distributed numbers

We define our own bins to do the histogram on

the bin width is the range of bins divided by the number of bins. 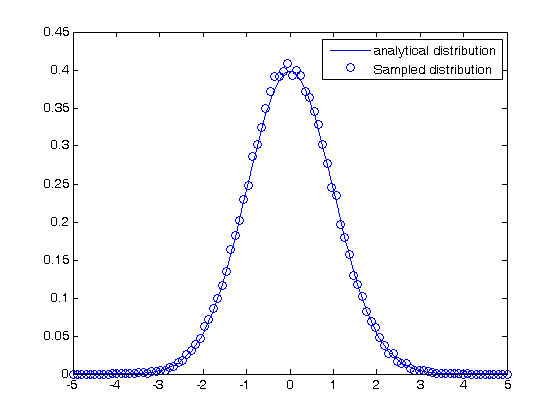 some properties of the normal distribution

What fraction of points lie between plus and minus one standard deviation of the mean?

samples >= mu-sigma will return a vector of ones where the inequality is true, and zeros where it is not. (samples >= mu-sigma) & (samples <= mu+sigma) will return a vector of ones where there is a one in both vectors, and a zero where there is not. In other words, a vector where both inequalities are true. Finally, we can sum the vector to get the number of elements where the two inequalities are true, and finally normalize by the total number of samples to get the fraction of samples that are greater than -sigma and less than sigma.

What fraction of points lie between plus and minus two standard deviations of the mean?

Matlab has a variety of tools for generating pseudorandom numbers of different types. Keep in mind the numbers are only pseudorandom, but they are still useful for many things as we will see in future posts.